We clearly made an impression with our home building skills on day 1 of volunteering. So much so that when it came to divvying up who would do what on day 2, it was decided that we would spend the day volunteering at a local preschool!

I’d like to think this was less because of our far-from-stellar mud hut building skills, and more because 7 new volunteers arrived yesterday (British university students!). The mud houses are small. And too many volunteers working on the interior is walls of one house would be more crowded then productive. Plus, I had actually requested to have my kids work with other kids when we filled out program forms months ago. So we are getting the best of both…

The preschool of kids age 2-6 can really only be described as a one room school house. Made of mud. The floors are mud but with a burlap covering over about half of it so the kids can sit on the floor. And while there were light bulbs in the ceiling, we never actually saw lights turned on. There was also a big yard, and a tree for shade. 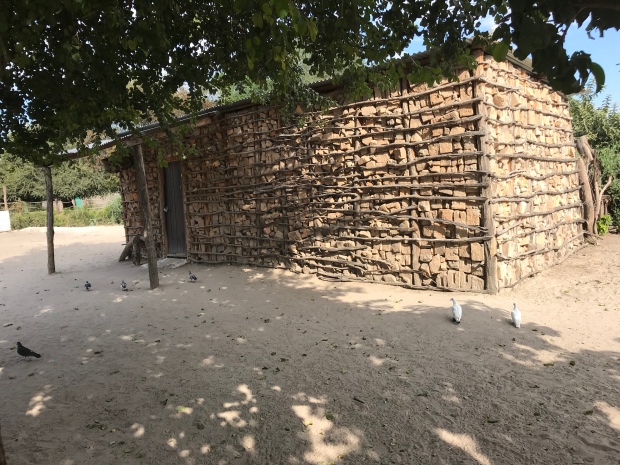 We showed up to about 25+ cheering kids. They were instructed to call us each “teacher.” So “teacher Vivi” and “teacher Zara” quickly got to work on some games we had discussed on the ride over: Simon Says (to teach the names of body parts in English) and Duck Duck Goose (which after some language barrier, we reinvented as Chicken Chicken Lion). 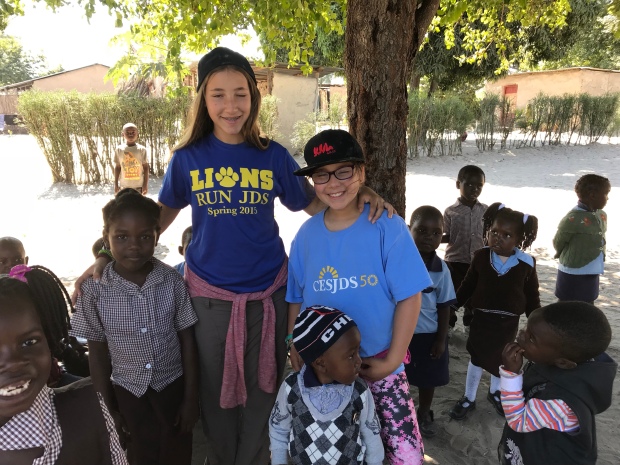 Nature is cool, and we’re not even on safari yet!

Then, lucky us, we got to join the preschool on a planned “nature walk” to a local fish farm (where they are working to rectify the overfishing of the Zambezi River, which runs through town). 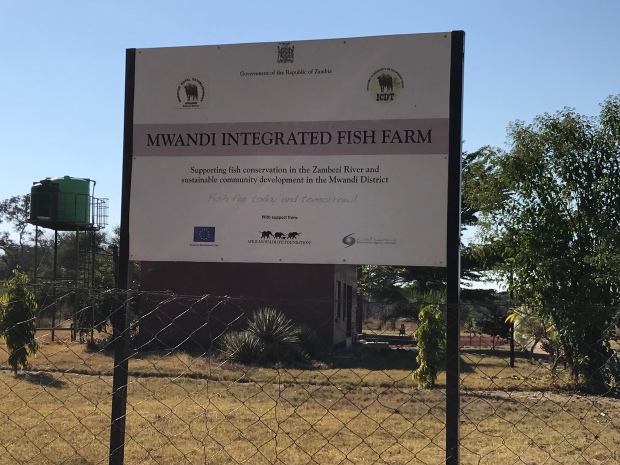 Neither the preschool kids nor my own kids cared much about the fish farm, though I learned a ton! Facts of the day: The gender of the local indigenous fish can be controlled by the hormones they put in the ponds. And, these fish are “mouth brooders” – meaning the mothers hold the eggs in their mouth until they hatch, starving themselves to grow their young. (Kind is the opposite of my own pregnancy experience!) The fish is not this specific species but is similar to https://youtu.be/q6Co0svvNPk. Gosh nature is cool, and we’re not even on safari yet!

At the fish farm we read books (the kids know them all by heart, so if you have any preschool appropriate books to donate, drop them on my front porch and I’ll have Adam bring them!). We did not have much of a selection, but read from what we had. There was one “opposites” book which Zara was pretty sure the kids didn’t understand while she was reading it. 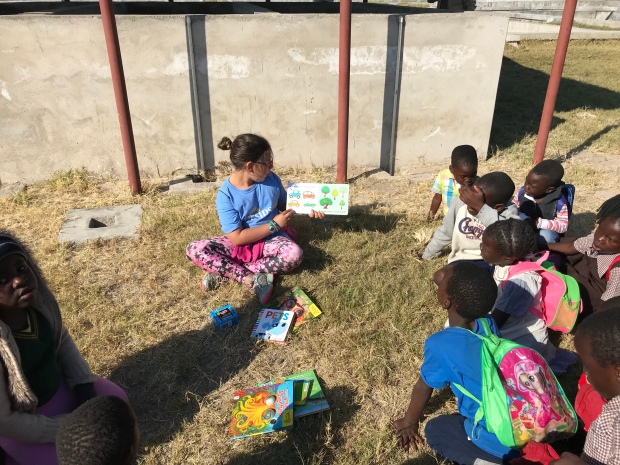 So we acted some out. We did awake and asleep; we lined kids up to show in front and in back/first last; we demonstrated tall and short, big and small. We made it interactive and I think fun. Most mostly the kids just wanted to eat snack and play Duck Duck Goose/Chicken Chicken Lion – much like kids at any preschool anywhere in the world! 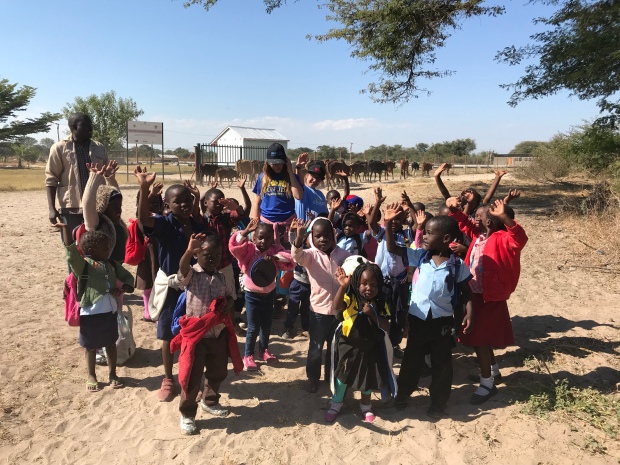 When we came back to the school (dodging donkey dung and a few herds of cattle enroute), we pulled out some surprises from the bag of donations we brought along to leave with the school. Wildly popular was the large LEGO-type train toy and all of its colorful pieces. As well as another construction/building type toy with wheels to build cars. 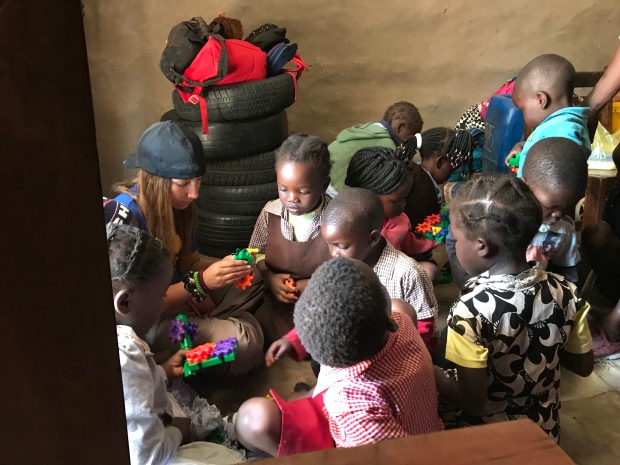 They are wild for toy cars here – and make them with soda cans and plastic bottles.

(So if you have legos to pass along, or toy cars/trains, again leave them for Adam to bring along!)

Also fun was the puppet show English conversation lessons we crafted on the spot with the help of Mordechai, Esther, King Ahasuerus and even Haman. These were puppets that came to us as part of Chabad Bethesda’s generous Purim basket back in March. As I was collecting and going through toys to bring to Africa, they made the pile. And today, they emerged from our crowded duffel to star in an English conversation exercise of “What is your name?” and “How old are you?” and “How are you?”

Each kid got to take a turn holding a puppet and answering these questions (asked by the puppets that Teacher Zara & Teacher Vivi were holding). It was so darn cute. Some kids “got” it, others needed coaching, others were just happy to hold the puppet for a few minutes and ignore our questions altogether. Such is life in any preschool, I imagine.

Vivi’s take on the day, above. unedited! (Not sure why thumbnail is upside down!)

It was a great day. Zara and Vivi had fun. We put some teaching games to work having learned from the best at Beth El Preschool and the Charles E. Smith Jewish Day School. And I had to take a two hour nap after, as it turns out working with young kids is even more exhausting than the manual labor of building mud homes! I send my respect to all the teachers & school staffers out there!

Not sure yet if we’ll be assigned to home building or preschool-ing tomorrow, but we look forward to the adventure whatever it will be!! 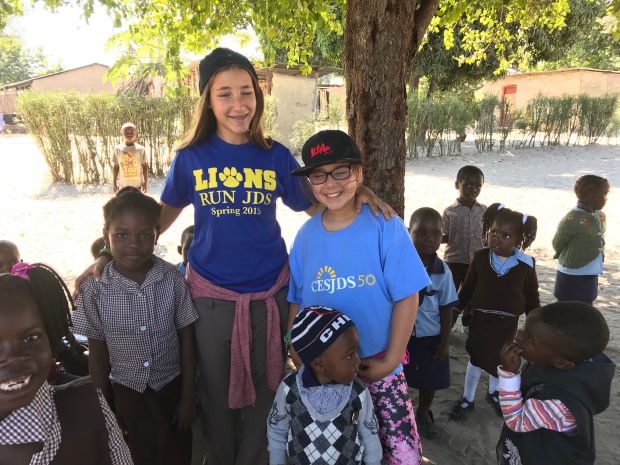